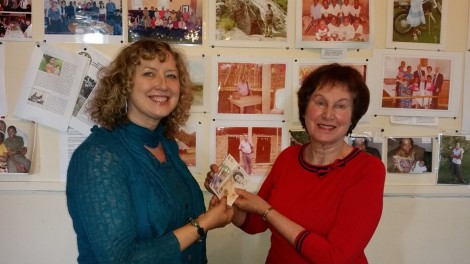 Thank you so much to all of the kind people who helped raise £185 for charity last month.
I presented £50, half the money raised in WRITE WAI PR & COPYWRITING SERVICES’ Easter Charity Draw, to Betty Ramping at Wivenhoe Methodist Church, who helps to organise fund raising for Bagamba B.Araali’s Beacon of Hope. The charity pays for the education of War Orphans in the Congo.

The other half of the money collected in the draw (£50) is being sent to the British Heart Foundation (BHF). We offered to write a press release as first prize in the raffle which was won by children’s author Emma R. McNally. A box of chocolates donated by Sarah’s Chocoholics Tendring was won by Kim Brown of Boleyn Events, Phil Bentham won the bottle of wine and E. Lammens the toiletry set.

An extra £85 was raised for BHF when I took part in their DECHOX CHALLENGE (people kindly sponsored me not to eat any chocolate in March).

Here at Write Wai PR & Copywriting Services we believe in helping and supporting others and regularly raise funds for charity or help charities promote events. We can’t cater for everyone, but help when we have time and are able.